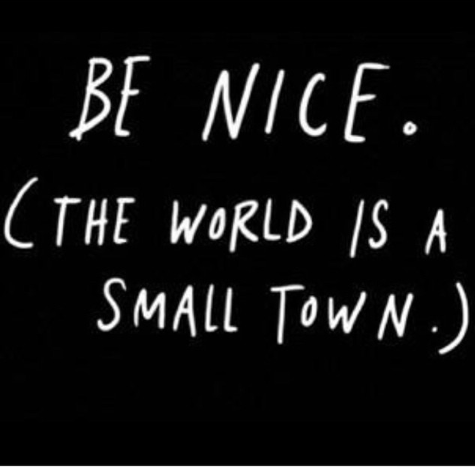 The world is a big place, full of people.What are the odds that you would run into certain random people twice or more in your lifetime? You cannot really say. People change, places change and situations certainly do not remain the same.

One thing is certain, people most times never forget. Before you take that next action or speak those words remember to be nice. The world is a small town with the same people.

Life Is An Adventure


Life is beautiful. It is a gift and also a wonderful adventure.
It is possible to be here on earth and not really live.
I do not mean having everything you have ever wanted.
Neither do I mean been completely content and happy all the time.
Try to give your all to whatever Godly cause or purpose you believe in.
It is either wholly or nothing at all.
Take time to pause and enjoy the little things even in the middle of chaos going on within and outside of you. Try not to hate the day before you even step out of the house in the morning.
Speak to your day, it can hear and trust God to make stepping out everyday worthwhile.
You do not have to experience everything out there. Not all paths are yours to take.
Some risk are worth taking. Sometimes you will make mistakes. Get up and continue with your life.
People will pass through your life. Like the flow of a stream, some will look for something in you to hold on to, whether good or bad. Others might just come and go, like they were never there.
Think of the next man. Let your heart be open to the needs of others. Your bronze is another man's gold. Let God use you to meet a need. Go on adventure with God. Climb through mountains with Him. Watch Him slay strongholds in your life. Let Him lead you through doors without having to turn the lock. Marvel as He makes a way where there seemed to be no way. I tell you, life is an adventure.


No More Hiding.
Only three people knew his secret. One of them lived in Italy now. The other was close by. Close enough to remind him of where he was 5years ago.  Things were working so well in his life.  He would be marrying Tinuke in three months time. They were looking forward to starting a family immediately after they became husband and wife. But, a part of him was somewhere faraway. A beautiful little girl who had the same nose and piercing eyes like her father. He looked at his image in the mirror and what he saw were the eyes of Victory staring back at him.
How long was he going to keep this hidden? The past seemed so far away and buried at the time he took that decision. Now he had to deal with it. He had taken a wrong turn 6 years ago. He knew God had forgiven him. But why did he still feel so much shame?

Those words in Isaiah 54 v7-8 kept playing in his head. God forgave him and God will help him sort it all out. He had to stop hiding his daughter. He needs to take this step to complete his healing process that started one year ago in his living room. He did not live in the past anymore. He has seen the light. It is time to come out.

No matter what you did in the past, God loves you and He still wants to have a relationship with you. Your mistakes and wrong turns in life should be left at His feet. Nothing is hidden before God. He knows everything. Your past might be in the form of a hurt,a person that is a constant reminder of how foolish you once acted, physical scars, emotional wounds. Whatever it is, give it to God and watch Him make you whole.
Posted by AVEC MOI at 12:34 PM No comments:

I have restless feet,
I want to go somewhere
Eager to hear music play
I want to sway to a lovesong
I really want to dance.
Someday, soon not alone
For now I will dance
Even if I hear no music.

Tola
Posted by AVEC MOI at 6:35 AM No comments:

I attended a women's program recently. During one of the sessions, we were told to hold hands, two by two and look into the eyes of the person whose hands you were holding. I have issues maintaining eye contact with people. Take a glance and look away. That is what I do. I remember the much older woman whose hands I was holding telling me it was not so difficult. With time I would get used to it. After a while we prayed for each other. The words just flowed in prayer. It felt good.

As a woman, if you saw me ( a fellow woman) for the first time, would you judge me without even speaking to me? Do I get a tag because of what I have on or the fact that I do not look a certain way on the day you laid eyes on me? Would I use the challenge you are passing through to describe you?
Would I ask my fellow married sisters to be wary of you because of the word "single".

As a young woman, would you be willing to learn from an older woman?  Do you know it all? Can you be corrected?

Can women be together in one room and really be what we are...women- womb carriers, midwives, helpers?

I do not have an issue with Forgivness.
Or so I thought.

Little did I know that I had  simply not loved enough
Or probably not been really hurt by someone dear.

Now I need to consider that word and simply act it out.
On a scale, the hurt weighs so much...more.

But..for this hurt,
I will forgive.
Posted by AVEC MOI at 6:07 AM No comments:

It is common knowledge that the people you surround yourself with often reflects in the way you see and live your life. I have understood that better in the past few years.

I have friends. I think I have made more friends in the past few years.I have some major influences in my life.There is a special friend  who tells me the truth, even though it hurts me and we probably will not exchange words for a few days till I cool off! There is one who knows my dream and gives me the opportunity to express it even if she has to come to me to do that! Some make me smile. Others make me think. Some make me go on my knees. Some make me work. Some just want to talk! A senior friend has taught me how important physical presentation is. I know I started dressing up better after I met her.She also hates mediocrity. I appreciate what I have because of some. I have taken a leap of faith with some.

I hear lifting words week after week where I worship. These days I see things differently. I have a green mentality. I now know what is important. Very different from what is urgent. I now view serving differently. Now, I am glad to go to God's house. I am also answerable to certain people there.I do not like it sometimes but it puts me in check!